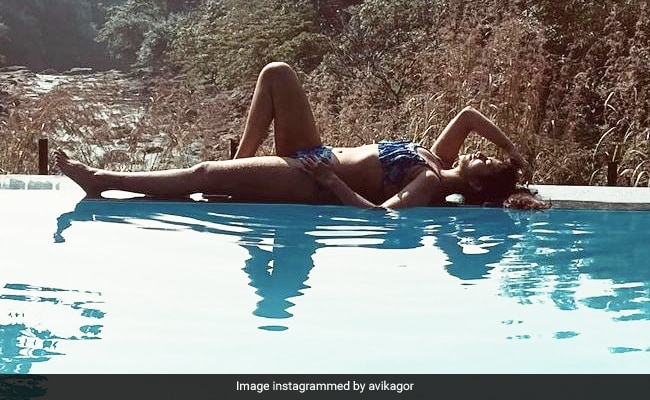 Actress Avika Gor, who is known for her performance in television show Balika Vadhu, set the Internet on fire after she posted a stunning picture of herself. Avika, who featured in headlines last year for her post on her drastic body transformation, posted a photo, in which she can be seen sun-bathing in a blue bikini at the poolside. The picture is now going crazy viral on social media, courtesy Avika Gor’s fit physique. Reacting to her post, her fans dropped comments like “dashing look” and “power to you girl.” Many users just dropped red heart emojis and wrote: “Beautiful.”

Avika Gor trended big time on social media last October when she shared a lengthy Instagram post describing how and why she underwent major body transformation. “I still remember one night last year, when I looked at myself in the mirror and I broke down. I didn’t like what I saw. Big arms, legs, a well-earned belly. I had let go too much. If it were due to an illness (Thyroid, PCOD, etc), it would be okay because that would be out of my control. But, it happened because I ate anything and everything, and I didn’t work out at all. Our bodies deserve to be treated well, but I didn’t respect it,” she wrote.

Another excerpt from her post read: “Well, one fine day I decided that it was enough, and that I must evolve. Nothing changed overnight. I just started to focus on the right things… Things that I should be proud of (like dancing). I kept trying to eat better and working out, and I had various setbacks. But, it was important that I didn’t stop and my people were constantly there to guide me.”

Avika Gor is currently dating Milind Chandwani, founder of the NGO Camp diaries and a former participant of Roadies Real Heroes. Her Instagram feed is filled with cute pictures of the couple.

Avika Gor starred as a child artist in Balika Vadhu, which used to air on Colors channel. Post that, she featured in TV show Sasural Simar Ka. Avika has also worked in a couple of films like Uyyala Jampala, Paathshala, Morning Walk and Raju Gari Gadhi 3.