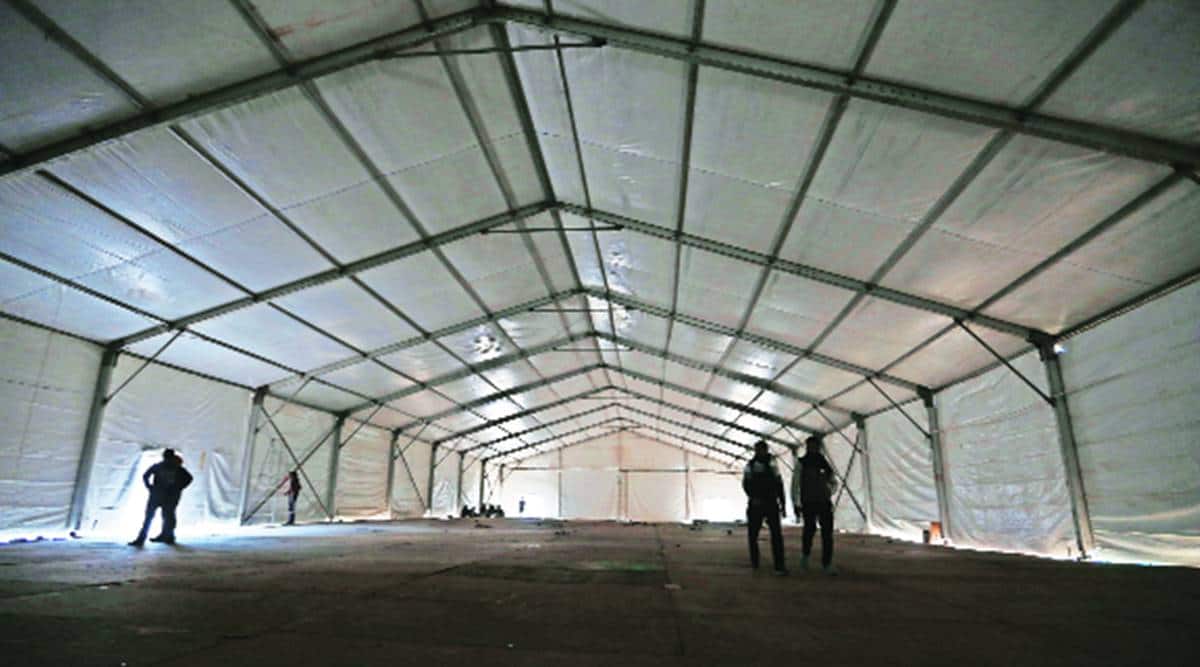 Keeping in mind the rising demand for better sleeping arrangements amid the cold, UK-based NGO Khalsa Aid has constructed an 800-bed semi-permanent shelter at the Tikri border, with 60% beds for men and 40% for women.

Khalsa Aid India director Amarpreet Singh said a similar 600-bed shelter was first constructed at the Singhu border, made of tarpaulin and other waterproof material.

“At Tikri, we had earlier made a shelter for women but the space was not enough. The demand was rising… At Singhu, we had created a shelter by waterproofing normal tents but that was not very successful. There were issues of leakage when it rained so we felt the need for something more durable. So we’ve used Clearspan tents,” he said.

The industrial tent technology uses aluminium frames to support tent material. The floor of the shelter has been covered with plywood.

“We constructed this keeping many things in mind. People from villages who come to visit the protest site, for example, had no place to stay. Hotels nearby cost a lot so that’s not an option for everyone. There are many old people who are not able to climb onto trolleys because of joint pain, so that was also a concern,” said Singh.

Covering an area of 300×100 feet, the shelter will also have 50 washrooms for women and 50 for men. “There will be a partition between the area for men and women. These areas are covered by 20 CCTV cameras too for safety. We have also arranged 10 washing machines and 30 desi geysers for everyone’s convenience,” he said.

The construction started about four days ago, and the shelter will become operational by Sunday.

“It has cost us around Rs 10 lakh, which we spent from the donations we received. We had given the contract for construction to a local Delhi-based company, which took care of raw material and labourers,” said Singh.

Meanwhile, several artists from the Punjabi and Hindi music and film industry including singers Harbhajan Mann and Jazzy B, and actors Swara Bhaskar and Aarya Babbar joined the protesting farmers at the Tikri border Saturday to lend their support.

At the ‘Artists with Farmers’ event, they expressed their solidarity with songs, poems and speeches and urged them to continue the struggle until their demands are met.

Popular singer Harbhajan Mann was among those who received the loudest cheers from the protesters. “Today the protest has reached such a stage that if someone doesn’t write four lines about the protest and mark their attendance here, they feel they have committed a big crime,” Mann said in Punjabi.

He also said, “It is the right of every artist to raise their voice in support of the farmers”.