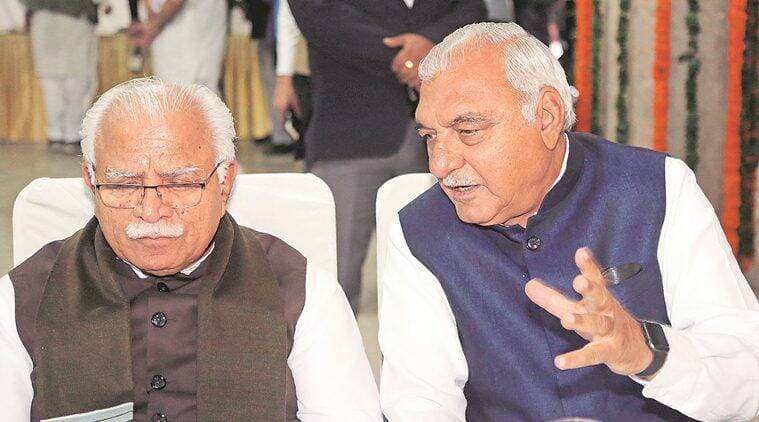 Targeting the ruling BJP government in Haryana over handling of the farmers’ agitation in state, former chief minister Bhupinder Singh Hooda Monday said one cannot run a government with an “iron fist” but needs to win people’s heart. In a conversation with The Indian Express, Hooda said, “You can not run the state with an iron fist and firing tear gas shells on your own people, you need to win people’s heart.”

Reacting to Chief Minister Manohar Lal Khattar’s statement on Sunday’s vandalism in a Karnal village ahead of the CM’s event there, Hooda lashed out at Khattar, saying, “Rather than acting as union government’s spokesperson, he should behave as a representative of his own state that he is leading. Rather than firing tear gas shells on people of Haryana, he should act as their representative, go to Delhi and sit with the Union government and assert that the three farm legislations must be withdrawn.”

Reiterating Hooda’s request to the Haryana Governor S N Arya for convening an emergent session of Vidhan Sabha, he added, “There are several MLAs from both BJP and JJP who are in touch. The days of this alliance are numbered and the fall of this government is imminent. The moment Vidhan Sabha’s session is convened, I am going to move a no-confidence motion. People of the state need to know who all are standing with them in this hour of crisis. Both BJP and JJP have lost the confidence of people who elected them. Several of their own MLAs have lost confidence in both BJP and JJP and are on the verge of quitting.”

Talking about Sunday’s protests in Kaimla village, Hooda said, “It is high time the government should understand the sentiments of people. Rather than putting every blame on the opposition, the state government must realise what they are doing. They should avoid confrontation with the people. The state government must stop provoking people by calling them names and considering the ongoing struggle of farmers as opposition’s. The more the government underestimate and ignore the farmers’ legitimate demands, the more trouble they invite.”

Taking a dig at BJP’s attempts to rake up SYL canal issue and several BJP MLAs organising one-day hunger strikes, Hooda said, “It is ridiculous the way these people have been behaving. It is not the government’s job to go and sit on hunger strikes. It is their job to implement and execute the Supreme Court’s verdict that has already gone in Haryana’s favour. Rather than performing their responsibility, they are sitting on hunger strikes.”

“In the ongoing farmers’ struggle and statewide protests against the top leadership of both BJP and JJP, their true face stands exposed. People of Haryana who were already fed up with this state government do not want to see their faces in their villages. That is the reason, several of these BJP and JJP MLAs cannot even enter their own villages, what to talk of anywhere else,” Hooda told The Indian Express.

Talking about Kaimla village protests, Hooda said, “It is unprecedented where a chief minister has to go in his own constituency among the people of his own State in such a heavy police cover. I am told that there were two ADGP rank officers, number of Inspector Generals of Police, at least five Superintendents of Police and more than 1500-2000 policemen deployed for a public gathering comprising barely 500-600 people.

He questioned the need of the government to “provoke” the farmers. “Who knows who were those people who were brought in for the so-called kisan mahapanchayat, while state’s police was busy firing tear gas shells on the actual farmers who were trying to reach the venue? Is this the way a state is run? Farmers had been struggling in this cold weather, in times of Coronavirus pandemic for their legitimate rights. Their protest had been going on at Delhi’s borders in a total peaceful manner. What is the need for the government to provoke them time and again by using force, by cane charge, water canons and firing tear gas shells?. I would again ask the Haryana government not to provoke farmers and rather help them in achieving their rightful goal,” he said,

Without naming Haryana’s former leader of opposition and INLD’s lone MLA Abhay Chautala’s announcement of resigning from Vidhan Sabha, Hooda said, “All those who have announced their resignation or are going to do so in the coming days, should not do so. All this will weaken the number of members in the House and rather help BJP in escaping the no-confidence motion that I am certainly going to move.”

About Khattar’s accusations on him and Congress party for orchestrating Kaimla village protests, Hooda added, “People in Karnal were not protesting against Congress. They were protesting against the three farm legislations. The government needs to get shed their arrogance and see what people are showing them. If people of the state are angry over these farm legislations and do not want it to be implemented, it becomes the duty of chief minister to go to Delhi and ensure that farmers get what they had been demanding for nearly two months now”.