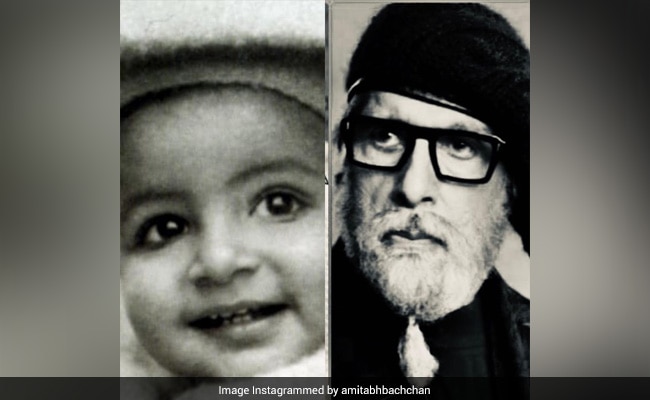 Bollywood veteran Amitabh Bachchan never fails to amuse his fans and his latest Instagram reminds us why. On Thursday, the 78-year-old actor shared a picture collage on his social media profiles and he pointed out a striking similarity in both the pictures. The first photograph happens to be from his infant days, while the second shot is a relatively recent one (from 2020 to be precise). In case you are wondering what the aforementioned similarity in the two drastically different pictures is, Amitabh Bachchan’s caption might help clear the confusion. “Topi ka style same (the style of the caps is same),” wrote Big B. He added, “Just add 78 years, some eye wear, and lots of undeclared hair… And .. Whoooom!.. 1942 to 2020.” The actor also made a reference to his evergreen Agneepath dialogue and added, “Aur ye solva ghanta chalu hai. Nahi, nahi nahi 2021 chalu hai.”

Amitabh Bachchan loves to share throwback pictures. Check out some of the posts here:

The actor’s upcoming projects include Ayan Mukerji’s Brahmastra, co-starring Alia Bhatt and Ranbir Kapoor, and Chehre, alongside Emraan Hashmi. He will also be seen in the sports drama Jhund. Last year, Big B signed a film called Mayday, which will be directed by Ajay Devgn and it will star Rakul Preet Singh.