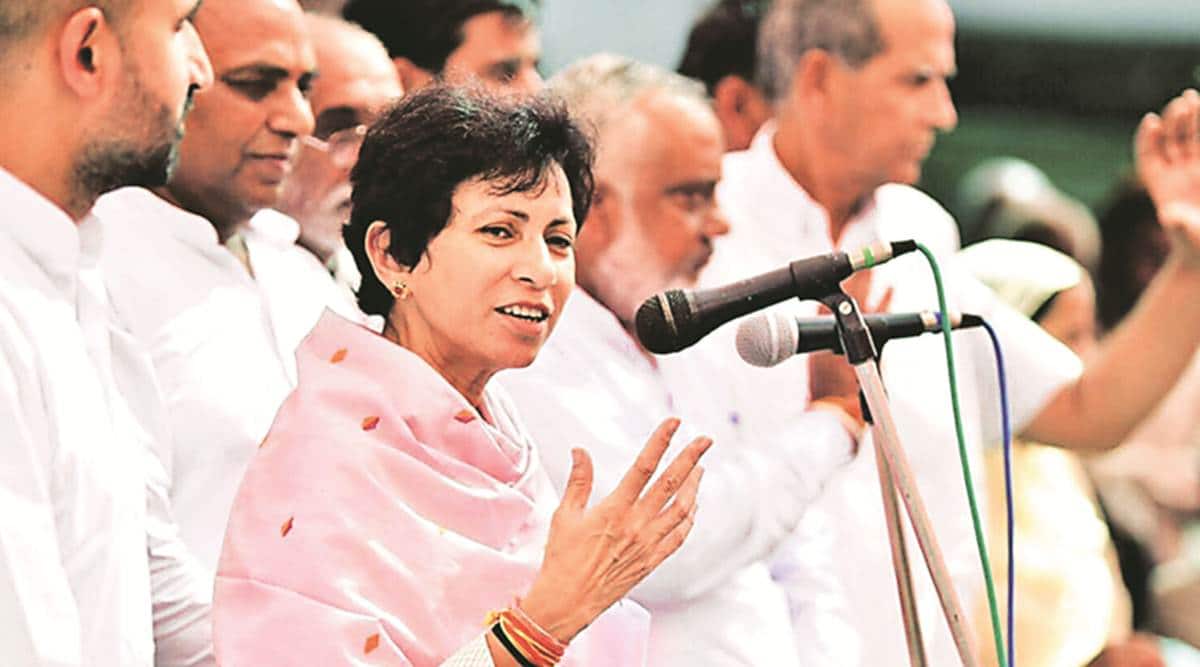 After former Haryana chief minister and the present leader of Opposition in the Assembly Bhupinder Singh Hooda, state Congress president Kumari Selja has now indicated that her party may make a move to topple the ruling BJP-JJP alliance. Hooda has already written to Governor SN Arya, requesting him to use his constitutional powers to call an emergency session of the Vidhan Sabha where he will move a no-confidence motion on the first day.

Speaking to The Indian Express on Thursday, Kumari Selja said, “It is true that several MLAs, be it from BJP, JJP or independents, have been in talks with each other as well as with the Congress. Considering the recent events (rising chorus of opposition against the farm laws) in the agriculture-dominated state of Haryana where almost all the MLAs are connected to its rural belt, several of them (from the ruling party, its alliance partner and even independents) are beginning to sense the situation on the ground. They are in touch with us and are also voicing their anger against these legislations. We live in a democracy. So, whenever a situation (to bring down the government) arises, we’ll act accordingly, in line with whatever the Constitution permits. When there is a power vacuum in the state, we will definitely try to fill that space.”

“They (the MLAs) are unhappy and this is right time for them to listen to their conscience,” she added.

To a direct question on whether the Congress is trying topple the BJP-JJP government, Selja, a former Union minister, said, “The thing is, if such a situation arises, something has to be done, in the spirit of our Constitution, to ensure there is no power vacuum, isn’t it? What needs to be done, should be done.”

On the meeting that Chief Minister Manohar Lal Khattar and his deputy Dushyant Chautala held with Union Home Minister Amit Shah and another between the JJP leader and Prime Minister Narendra Modi, coming on the heels of the previous one, Selja said, “These are a fallout of the public anger that they are facing across the state. They’ve sensed that people are turning against them. It was evident from what they tried to do in Karnal by organising such an event (Kisan Mahapanchayat). They had turned the entire area into a cantonment with huge police deployment but still couldn’t stop what followed (farmers’ protests). It was a classic case of aa bail mujhe maar (showing the red rag to a raging bull). They tried to hold this event despite knowing that the public mood had turned against them. They will continue to face such protests. It’s high time they went to the Prime Minister, convened a special session of the Assembly and faced what follows. One has to sense the mood of the people. Or else, they will face more such situations every day.”

On Khattar squarely blaming the Congress and Communists for demonstrations at Kaimla village in Karnal district, Selja said, “There’s no point pointing fingers at others. It does not help them (the government). Calling farmers names, calling them terrorists will not help. Being the main opposition party in the state, the Congress is doing its part by holding agitations. Right from Day 1, we’ve made our stand very clear – that we’re are against these three black laws. We’re the first to organise district-wise protests and submitted memorandums against these legislations in all districts. Even tomorrow (Friday), we will hold a demonstration outside Haryana Raj Bhavan in Chandigarh. In fact, we’ll protest outside all governors’ houses across the country. We’re doing our bit.”

Several JJP and Independent MLAs have been voicing their opposition to the farm laws. Last month, many JJP MLAs had discussed withdrawing support to the BJP in Haryana, and the sentiment was clearly conveyed to Dushyant Chautala as well. While offering to mediate the talks between the agitating farmers’ unions and the Centre in quest of an end to the ongoing standoff, Chautala also claimed that he would be the first one to tender his resignation if he failed to ensure minimum support price (MSP) to Haryana farmers. However, he has spoken in support of the farm Bills, claiming that the Opposition was deliberately trying to mislead farmers.

Amid talks of the alliance partner withdrawing support to the government, both Khattar and Chautala have maintained that there is “no threat” to the ruling coalition in the state.

Currently, the BJP has 40 MLAs and the JJP 10 in the 90-member House, with the Congress at 31. Another seven Independents and an MLA each from the Indian National Lok Dal (INLD) and the Haryana Lokhit Party round off the tally. Falling short of the majority mark in the 2019 Assembly polls, the BJP sewed up a post-poll alliance with the JJP to form the government. Several of the Independents, who had earlier pledged their support to the BJP, have withdrawn it in solidarity with the farmers’ protest.