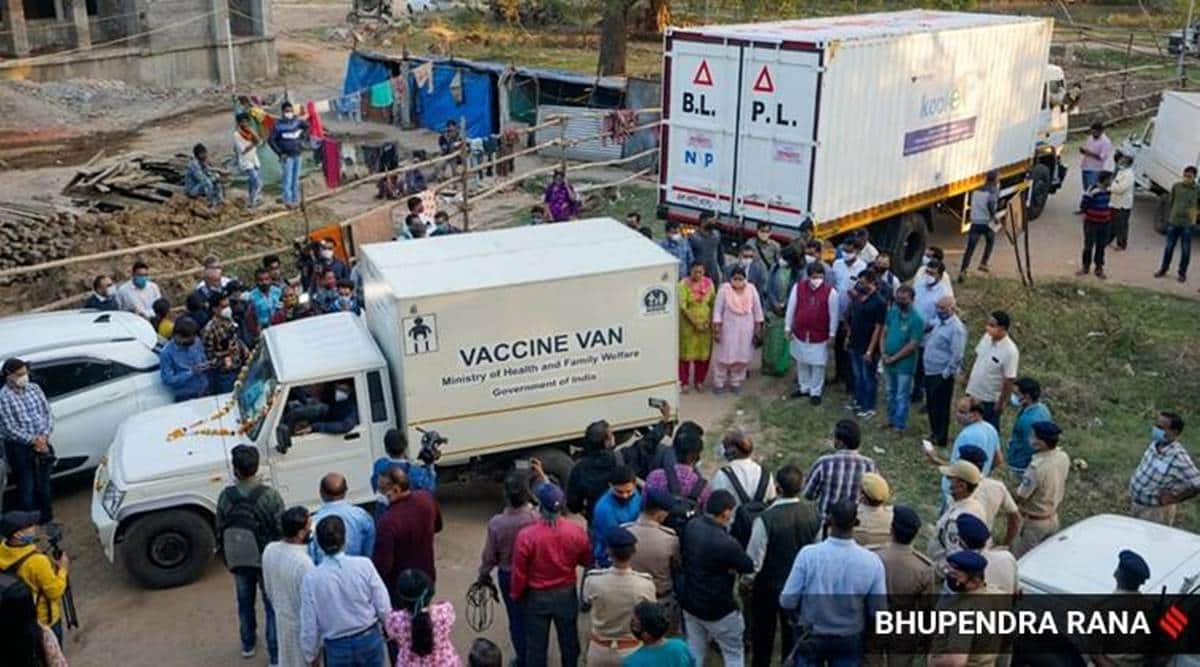 Nearly 16,000 people selected randomly will be vaccinated at 161 centres in 33 districts of Gujarat on Saturday as Covid-19 vaccination drive begins across the country. The state has received 5,41,000 Covishield vaccines from the Serum Institute of India (SII) in Pune.

After 287 vaccination booths were designated initially for the vaccine rollout, mainly in Ahmedabad and Rajkot districts, as was declared by Deputy Chief Minister Nitin Patel on January 11, a revised plan and communication from the central health ministry limited it to 161 centres with live-streaming facilities that will be supervised by a minister and/or other leaders.

District and municipal corporation officials have been directed to provision 100 beneficiaries per site, said a health official in Ahmedabad on condition of anonymity. As per a state health department official, the reduction in vaccination centres by more than 100 such sites primarily came “because we needed live-streaming facility”.

Nitin Patel who also holds the health portfolio, had said on January 11, “On January 16, across nearly 287 booths in Gujarat — most of them in Ahmedabad and Rajkot — the PM will interact with doctors, paramedical staff, etc. Across Gujarat nearly 25,000 booths (vaccination sites) have been prepared…”

From the initial plan to launch in two districts, the state will now see the drive launching from all 33 districts and eight municipal corporation areas around 10 am.

State immunisation officer Nayan Jani said, “An estimated 100 health workers will be present at each site, so we can say that nearly 16,000 are expected to get vaccinated on the first day across Gujarat. Sunday will be an off day. Monday and Wednesdays are routine immunisation days, so we cannot disrupt that and hence Covid-19 vaccination is not planned for these two days. So technically after the first day of vaccination on January 16, the second day of vaccination is expected to be on January 19, Tuesday. When the vaccination sites will be scaled up and to how many, will be subject to guidelines issued by the central and state governments.”

Pulse polio drive, which was scheduled for January 17, has been postponed to January 31. Jani added, “The beneficiaries are selected randomly so we have health workers from everywhere, including private facilities, getting vaccinated on Saturday.”
In Ahmedabad, the drive will kickstart from 23 sites, including three in rural jurisdiction. Chief Minister Vijay Rupani and Deputy CM Patel will be present at the Ahmedabad Civil Hospital (ACH).

A source at ACH said that of the 100 beneficiaries planned, 10 have been chosen for photo ops and interactions with the PM and other political dignitaries, while for 90 others, the drive will continue in normal course, in a separate area.

In Vadodara, where 94,500 doses of Covishield vaccine arrived on January 12, the Vadodara Municipal Corporation (VMC) has scaled down the number of centres to six from the earlier designated 11 centres where 100 beneficiaries each will be administered the vaccine.

While Vadodara MP Ranjan Bhatt will be the guest at Jamnabai, Gujarat Assembly Speaker Rajendra Trivedi will attend the drive at SSG Hospital. City BJP MLA Manisha Vakil and recently re-elected Karjan BJP MLA Akshay Patel will attend the event at Kishanwadi and Maneja respectively, while Akota BJP MLA Seema Mohile and Sayajigunj BJP MLA Jitendra Sukhadia will be at the two private hospitals in Chhani and Atladara respectively.

Medical Officer for Health, Vadodara, Dr Devesh Patel, said, “The list of beneficiaries has been drawn up from the list of health workers registered for the vaccination program. The centres have been reduced from 11 to six as per the order of the state government and we have been asked to set up a separate area for the dignitaries with a stage and LED screens, where Prime Minister’s interaction will be telecast live.”

Officials said that the civic body has been asked to order a rose each for the beneficiaries as a gesture of support, which will be handed over by the elected representatives. A bunch of recipients, including some doctors, will be asked to interact with PM Modi during his live session, the official said.

A senior VMC official, in charge of logistics of the programme, said, “The events that are simultaneously scheduled will take away a lot of manpower… so it was necessary to scale down the number of centres… We will have a bigger number of centres in the next round.”