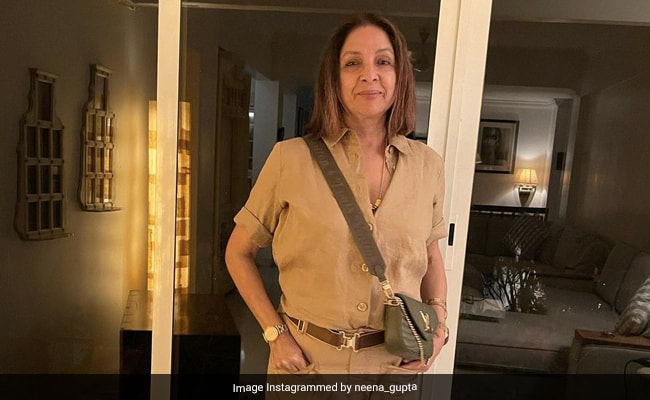 The incorrigible Neena Gupta has shared another sartorially-savvy post on Instagram. It’s not “frock ka shock” this time; Ms Gupta appears to have had a stream of consciousness moment while getting dressed for the day. “Police wali ka role karne ki badi ichcha hai, let’s see,” she wrote in her caption. In the accompanying photo, Neena Gupta’s OOTD is khaki from head to toe – chinos and blouse cinched by a belt. Now that she mentions it, the 61-year-old actress could pass for a super-stylish plain-clothes police officer. Any takers? Check out Neena Gupta’s post here:

Neena Gupta, a staple of Eighties art house cinema such as Trikaal and Mandi, has seen a career resurgence lately, building up from roles in Veere Di Wedding and Mulk to her headlining performance in the acclaimed Badhaai Ho. Ms Gupta’s recent film credits include The Last Color, Panga and Shubh Mangal Zyada Saavdhan. She will be seen in a cameo in the Ranveer Singh-led ’83 this year and also has Gwalior and Dial 100 in her big screen lineup.

Neena Gupta’s television career has flourished since the golden age of Doordarshan when she appeared in shows like Khandaan and Gul Gulshan Gulfaam. She is best-remembered for writing, directing and starring in the long-running Saans. Most recently, Neena Gupta starred in the well-received web-series Panchayat. She also appeared in Made In Heaven and had a starring role in Masaba Masaba, opposite her real-life daughter designer Masaba Gupta.