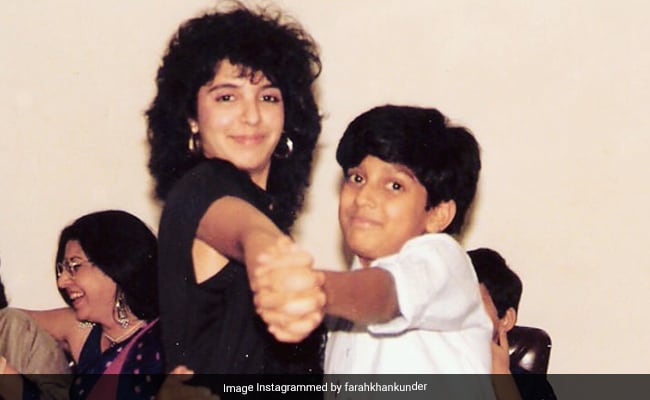 Farah Khan and Farhan Akhtar in a throwback (courtesy faroutakhtar)

Farhan Akhtar and his cousin, director-choreographer Farah Khan chanced upon a major blast from the past, starring the two of them, and posted them on their respective Instagram with interesting captions. While Farah went on a nostalgic tour for her caption, Farhan, known for his signature sense of humour, added an ROFL touch to it. “Before internet, wi-fi and computers, there was dance! The best family bonding.. Farhan and I in my ever Flashdance haircut, tripping (in) the light, fantastic (my beautiful mom in the sari at the back with Rosy Maami),” wrote Farah. In the photo, Farhan and Farah can be seen dancing, with Farah sporting a signature Eighties hairstyle, made iconic by the 1983 movie Flashdance.

Meanwhile, if you are wondering about Farhan’s expression, here’s what he has to say: “The wonder years. Dancing with or should I say holding on to dear life (that’s what it looks like) with Farah (love the Flashdance hair).” Farhan’s Zindagi Na Milegi Dobara co-star Hrithik Roshan was one of the first ones to drop a comment: “Amazing,” he wrote.

Thank you, Farhan Akhtar and Farah Khan for sharing this Flashback Friday treat.

Farah Khan has an impressive collection of throwbacks, some of which she often shares on social media.

Farah Khan is the director of films such as Main Hoon Na, Om Shanti Om, Tees Maar Khan and Happy New Year. Farhan Akhtar was last seen in Netflix film The Sky Is Pink His upcoming movie is sports drama Toofan. He has also directed films such as Dil Chahta Hai, Lakshya and the Don series.