Nearly a year after India reported its first case of the novel coronavirus, which has so far sickened more than a crore people and killed more than 1.5 lakh, India on Saturday kicked off the world’s largest immunisation exercise against Covid-19.

On Day 1, over 1.91 lakh beneficiaries from the three crore priority group comprising healthcare and frontline workers were given the first shots of Covid-19 vaccines as part of the first phase. No case of post-inoculation hospitalisation was reported, the Union Health Ministry said.

Stating that the vaccination drive was successfully conducted on the first day, Additional Secretary in the Union Health Ministry Manohar Agnani said a total of 16,755 personnel were involved in organising 3,351 vaccination sessions. The 11 states and union territories where both Covishield and Covaxin were administered were Assam (65 sessions), Bihar (301), Delhi (81), Haryana (77), Karnataka (242), Maharashtra (285), Odisha (161), Rajasthan (167) Tamil Nadu (160), Telangana (14) and Uttar Pradesh (317).

Launching the exercise through video conferencing, Prime Minister Narendra Modi said that the emergency use authorisation was given to the two ‘Made in India’ vaccines only after scientists were convinced of their safety and effectiveness. The vaccines will ensure a decisive victory for the country over the coronavirus pandemic, he said.

Earlier this month, the Drug Controller General of India (DCGI) had given its nod to Oxford/AstraZeneca’s Covishield vaccine which is manufactured by the Serum Institute of India, and the indigenously developed Covaxin from Bharat Biotech for ‘restricted emergency use’.

The Prime Minister reminded people that the vaccine needs to be taken in two doses and asked them to continue with masks and social distancing even after receiving the first jab.

PM Modi became emotional during his speech while discussing the disruption the pandemic had caused to people’s lives, their quarantine struggles and denying the dead traditional last rites. He also referred to sacrifices made by healthcare and frontline workers, many of who lost their lives to the pandemic.

“Our vaccination programme is driven by humanitarian concerns, those exposed to maximum risk will get priority,” the Prime Minister said. 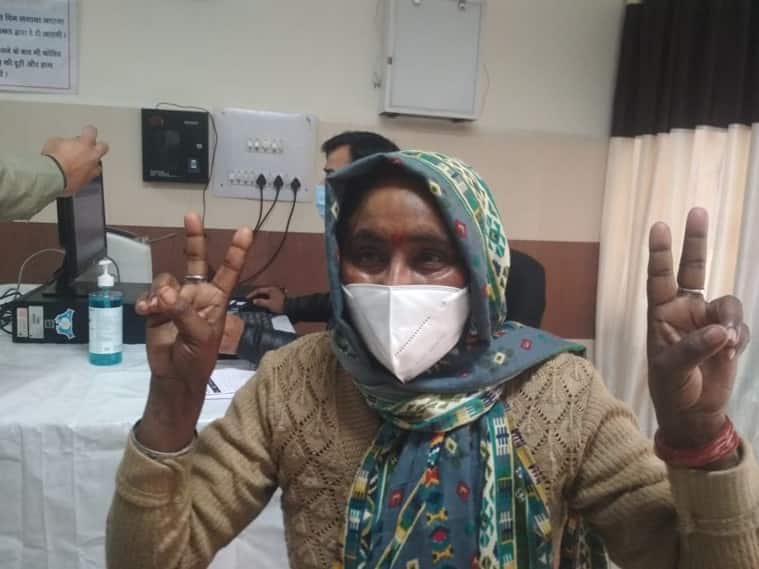 Saroj Bala, a 40-year-old safai karamchari, is the first beneficiary of Covid vaccine at Sector-4 in Panchkula. (Express photo by Jaipal Singh)

India is drawing from its experiences of its Universal Immunisation Programme and the booth strategy during elections to conduct the massive drive. The Centre has disbursed Rs 480 crore to states for the operational cost of the exercise. Aadhaar and the Co-WIN platform will be used extensively to identify and monitor beneficiaries. If all goes to plan, 30 crore people may be vaccinated against the contagion by July end.

The government has created a dedicated 24X7 helpline number — 1075 — to address queries related to the vaccine rollout and the Co-WIN software.

Bharat Biotech to pay compensation if Covaxin causes side effects

Bharat Biotech, the manufacturer of Covaxin, has said the company will pay compensation to vaccine recipients in case of any serious adverse effects experienced after receiving the shot. In the consent form to be signed by the vaccine recipients, Bharat Biotech said, “In case of any adverse events or serious adverse events, you will be provided medically recognised standard of care in the government designated and authorised centres/hospitals.” “The compensation for serious adverse event will be paid by sponsor (BBIL) in case if the SAE is proven to be causally related to the vaccine,” the consent form said.

Fingers were raised over the efficacy of the Covaxin as its phase 3 clinical trials are yet to be completed.

“Hence it is important to appreciate that receiving the vaccine does not mean that other precautions related to Covid-19 need not be followed,” the consent form said.

After attending the first vaccine shot at the All India Institute of Medical Sciences (AIIMS) in Delhi, Union Health Minister Harsh Vardhan said the two vaccines would work as ‘sanjivani’ in the fight against the pandemic.

“We have won the battle against polio and now we have reached the decisive phase of winning the war against Covid. I want to congratulate all frontline workers on this day,” PTI quoted Vardhan as saying.

Home Minister Amit Shah took to Twitter to say this ‘New India’ led by PM Modi is a nation which transforms crisis into opportunities and challenges into achievements. A medic administers the first dose of Covishield vaccine to a frontline worker in the presence of Union Health Minister Harsh Vardhan, after the virtual launch of COVID-19 vaccination drive by Prime Minister Narendra Modi, at AIIMS in New Delhi, Saturday, Jan. 16, 2021. (PTI Photo)

“This ‘Made in India’ vaccine represents the determination of this self-reliant India. On this historic day, I bow to all our corona warriors,” he said.

Vardhan said the entire country is proud of the stellar leadership of Prime Minister Narendra Modi which has been instrumental in India’s famed battle against Covid-19. “Congratulations India on the launch of world’s largest vaccine drive,” he wrote on the microblogging site.

Law Minister Ravi Shankar Prasad described the launch of the vaccination drive as “historic and a memorable day.”

“India becomes ‘aatmanirbhar’ (self-reliant) in the fight against Covid-19. Vaccines made in India being rolled out. Greatly appreciate the inspiring leadership of PM Narendra Modi which made it happen. Vande Mataram,” he wrote on Twitter. “This is a proud moment for every Indian and I would like to convey my deepest appreciation to all the scientists for the remarkable speed with which the vaccines were developed in a record time,” he wrote in a Facebook post.

It is pertinent to point out that generally it takes several years before a vaccine reaches people at large after successful completion of all trials at all stages, the vice president said.

Meanwhile, senior Congress leader Manish Tewari alleged that the emergency use approval given to the indigenously developed vaccine Covaxin was “sans due process”.

“As vaccine roll out begins, it is all a bit puzzling India has no policy framework for authorising emergency use. Yet, two vaccines have been approved for restricted use in emergency situation,” Tewari said in a tweet just before PM Modi launched the vaccination drive.

“COVAXIN is another story — Approvals sans Due Process,” the former union minister added.