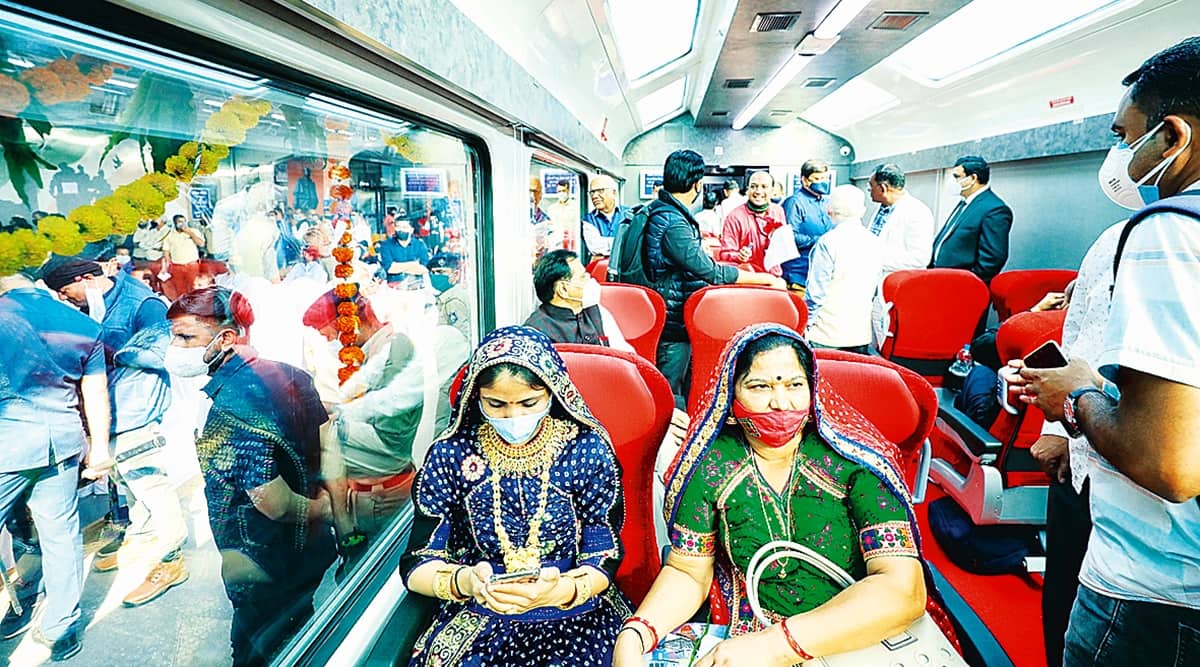 The first Jan Shatabdi Express train with a vistadome coach, displaying images of the country’s diversity in cuisine and culture, chugged along the 180-km route from Ahmedabad to Kevadia, after Prime Minister Narendra Modi virtually launched it and Deputy Chief Minister Nitin Patel flagged it off amid chant of vedic hymns at the Ahmedabad railway station on Sunday.

Noted Gujarati folk singer Gita Rabari who was among the guests riding the vistadome coach commended Modi for turning Kevadia into a tourist spot. She said, “I have never been to Statue of Unity and am excited to visit it today.”

Bhupendra Patel, grandson of Sardar Patel’s youngest brother, Kashibhai Patel, who lives in Vallabh Vidyanagar, has been taking guests to the SoU. “ I usually take them by road. This train has made it much easier. People from any part of the country can reach this place without any transportation issues,” he told this paper.

Atul Patel, another relative of Sardar Patel, who lives in Vadodara, said, “With the construction of SoU and this train service, Kevadia has got chance to be in the limelight as a tourist destination. The best thing is that this train service was made possible in 20 months.”

Kevadia, nestled in the Vindhya mountains and home to the Sardar Sarovar Dam on the Narmada river, has been popular as a picnic spot for schoolchildren.

The Vistadome coach that would cost Rs 885 per seat, had 44 passengers, including Padma awardee Vishnu Pandya, who is the chairperson of the Gujarat Sahitya Akademi, and has helped provide content for the Sardar museum at the SoU.

Around 25 students of Sanskrit Gurukul Vidyalay from Asarva area of Ahmedabad chanted slokas and folk dancers performed as the marigold bedecked train left Ahmedabad, with a total 14 coaches with a capacity of1,276 persons.

On Sunday, 885 people took the inaugural ride through cotton, plantain and castor fields, in the Charotar region of central Gujarat into the forested and tribal district of Narmada, covering 180 kms at a speed of nearly 110kmph, close to the time taken by a road trip. The train was welcomed by local people at Nadiad, Anand, Vadodara, Dabhoi and Chandod. The train is scheduled to make daily trips from Ahmedabad to Kevadia and back.

Parth Vataliya, a school student from Sarkhej area of Ahmedabad, said, “I am visiting the SoU for the first time and very excited about it. I loved this journey as we have been served nice food and the train is very clean.”

Chief priest of Jagannath Mandir in Ahmedabad, Mahant Dilipdas Maharaj, was thankful to Modi for inviting the “sant samaj” on the first ride, and said, “My blessings are there for the efforts of PM Narendrabhai Modi who has started this train which is going to benefit a lot of people.”

congratulating Modi, Akhileshwardas Maharaj from Ahmedabad said, “What PM Modiji is doing will benefit immensely to the country economically and vocationally. It will also help people understand what Sardar Patel had done for Somnath temple and for Dharm.”

According to Sacha, “Through such initiatives, people come closer to each other. They get a chance to know each other. Also, with this service, people can reach Kevadia easily and see Statue of Unity. They will be able to enjoy our rich culture.”

Joel Christian, an evangelist from the Church of North India, Gujarat Diocese, said, “It is our utter privilege that we are representing Christian community and grateful to PM Modi and CM (Rupani) for witnessing this historic moment of diversity.”

The group of industrialists that took the train included Shilpa Bhatt, chairperson of Business Woman Wing Committee of Gujarat Chamber of Commerce and Industry. Two other business women travelling with her included Swapna Sai and Sarangi Kanani.

“Earlier, one could reach Kevadia only by road. Now people have another option… Train journey is very comfortable compared to road journey, which is tiresome. Today’s development will change the direction of tourism in Gujarat. It will also inspire other states,” they said.

At Kevadia, where Chief Minister Vijay Rupani was present, the special invitees were taken on a tour of the 182-metre statue of Sardar Patel, the Jungle Safari and the Children Nutrition Park.

Commercial operations of the train starts from Monday with ticket price ranging between Rs 120 and Rs 885.