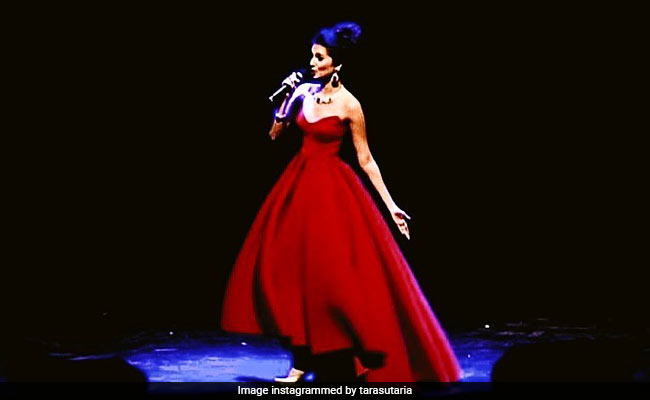 Tara Sutaria, who is also a professional singer, took a trip down memory lane and dug out a memory dipped in nostalgia. “A photograph from one of the best evenings of my life,” Tara captioned a concert photo, in which she can be seen performing at Mumbai’s The Royal Opera House. In her caption, Tara wrote what made this concert special was that she performed along with Jazz legend Louis Banks. “My concert with the great (and my dearest) Louis Banks for the opening week of The Royal Opera House. Unforgettable and a part of me forever. This was a month before I shot my first film,” she wrote. Tara Sutaria stepped into Bollywood with 2019 movie Student Of The Year 2, in which she co-starred with Tiger Shroff and Ananya Panday. Ahead of joining films, Tara Sutaria has headlined solo concerts in London and Tokyo, apart from Mumbai.

Tara Sutaria started her career as a Disney star, featuring in shows such as Big Bada Boom, Entertainment Ke Liye Kuch Bhi Karega and became a household name for her roles in the shows – The Suite Life of Karan & Kabir and Oye Jassie.

Tara Sutaria often revisits her throwback treasury and amuses her Instagram family with her childhood memories, sometimes featuring her sister Pia Sutaria, who is a trained ballet dancer and also a model. Adding an ROFL caption once, Tara had posted this: “Evidently the needier twin Pia Sutaria. We look like baby momos.”

In terms of work, Tara Sutaria’s list of upcoming films include Heropanti 2, Ek Villain 2 and Tadap, in which she will be seen sharing screen space with Ahan Shetty.