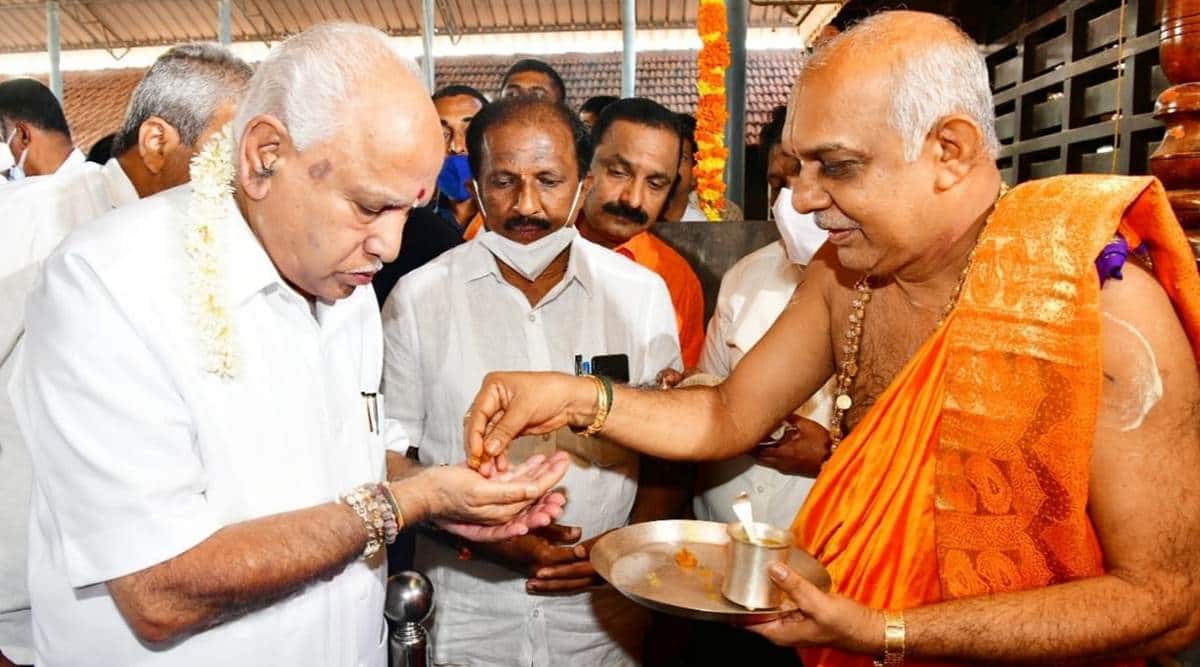 Karnataka Chief Minister B S Yediyurappa has carried out a series of visits to temples in the coastal Karnataka region over the last two days amid disgruntlement within the BJP’s state unit over the recent cabinet expansion and revival of a set of old corruption cases against Yediyurappa by the High Court.

The allotment of portfolios for the seven new ministers inducted on January 13 has been on hold for a week.

Yediyurappa has visited the Sri Krishna Temple in Udupi, Sri Venkataramana Temple at Karambali in Udupi, Sri Mahalakshmi Temple at Kapu and the Sri Vinayaka Temple in Kundapur in what he described as a partial break from political activities following the cabinet expansion. He has also hosted Defence Minister Rajnath Singh and Home Minister Amit Shah since the expansion.

“I will seek God’s darshan and come back. Once I return, I will discuss with senior ministers (the issue of portfolio allocations). In one or two days it will be done,” Yediyurappa said before setting out on his visit to coastal Karnataka on Monday.

Since a visit to New Delhi on January 10 to obtain clearance for the cabinet expansion, the Chief Minister has appeared to be a forlorn figure with several BJP legislators, who have not been accommodated in the cabinet, targeting him and some alleging blackmail and bribery behind the choice of candidates. The Karnataka CM is expected to encounter more dissidence when portfolios are allocated for the cabinet later this month with several old and new ministers vying for plum portfolios.

Vijayapura MLA Basavaraj Patil Yatnal and MLC H Vishwanath have alluded to the existence of a CD — recorded by a close aide of the chief minister — which is being used against him by rivals.

“Only a weak chief minister will be blackmailed. It is their own party members who are making the allegations… it shows there is some truth in it,” said Siddaramaiah, former Karnataka CM and leader of the opposition Congress party in the state legislature, last week.

Yediyurappa is also up against three cases of corruption dating back to his earlier tenures as Deputy CM and CM which have been revived since December 22 following orders of the Karnataka High Court.

Siddaramaiah has claimed that Yediyurappa will not continue as Chief Minister beyond April, alleging that he was provided this information by an RSS insider.